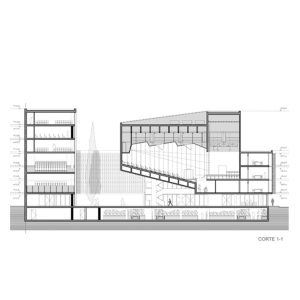 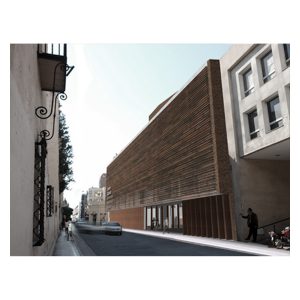 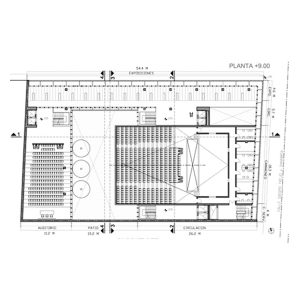 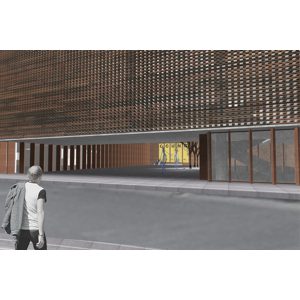 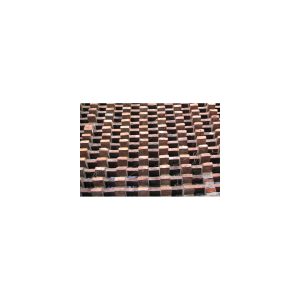 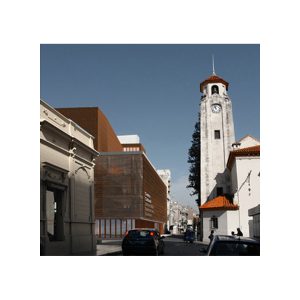 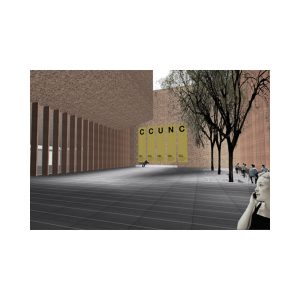 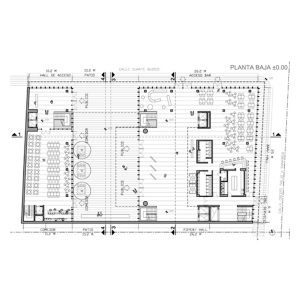 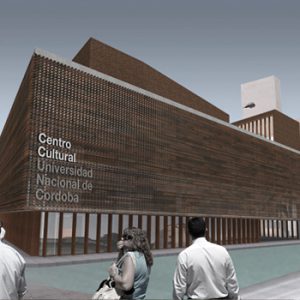 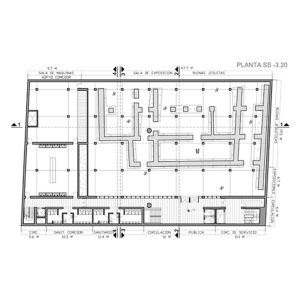 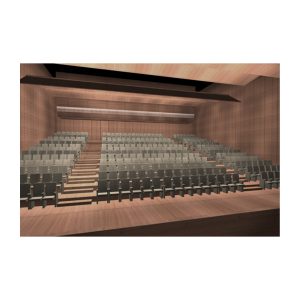 There are four central tenets this proposal addresses:
1.Address the University’s (UNC) need to put into place cultural policies that emphasize new methods of both the creation and dissemination of knowledge.
2.Take into account the historical value of building relationships within and among buildings, including, among others, the Jesuit Colegio Nacional Monserrat (Monserrat National School), the church of the Compañía de Jesús, and the Jesuit Seminary, the latter having been declared part of the country’s historical heritage.
3.Take into account the Jesuit heritage found in existing buildings, which together constitute a historical unity with the Society of Jesuits, the former rector of the university (now a museum), and the Monserrat National School.
4.Contribute, with the addition of this building, to the composition of public space in the city.

The proposed project will operate under these conditions contemporaneously, with the intention of elevating and continuing Cordoba’s architectural, urban, and cultural legacy.

The proposal is to emphasize and enhance the historical heritage of the existing Jesuit buildings located at the site, which form a unified bastion of Jesuit construction in Enlightenment Square. It should be noted that this area contains an intangible heritage that brings history to life: the history of the people that lived there and their culture, as well as the collective imagination of the city’s inhabitants.
The first step is to recognize the need for holistic archaeological work, whereby it is necessary to demolish the two existing buildings in order to properly begin work. Thus it is proposed to construct an underground space which will allow for exploration of the ruins, and an exhibition thereof. This will create a fantastic re-creation of the original construction space, which will be open to the visiting public. For this space, the excavated Jesuit ruins will be lit by a hidden illumination system to highlight the exhibits. This large exhibition space will display the objects found during the excavation, as well as written and audiovisual elements that will tell the story of the Jesuit culture, with the aim of educating people about the history of the city in a fun and interesting way.

The formal resolution intends to reach a compromise between:
1.The complexity inherent in conforming to the dimensions of the plot, its area (as defined by the urban planning code), and the intricacies of the program.
2.The public aspect of the program and the existence of the Jesuit ruins.

The building is shaped around a courtyard that functions as an expansion of public space and an intermediate space between the Hall and the Foyer. The patio is surrounded by a perimeter enclosure, with a suggested height of 12 meters, which will house the university press. The volume contains an area with 21 meters of vertical space, where the two principal editions of the main program may be placed, according to each stage of the project; a main auditorium on one side, and a space designated for the second stage of construction. In the first stage, the former ITU and cafeteria building will be completely demolished, and these services will be relocated temporarily to another location.

The structural system consists of slabs, beams, and columns of reinforced concrete. They will work independently in the main auditorium, with the rest of the building. We propose an enclosure of floor to ceiling carpentry, screened by a brick exterior and an apparatus that generates a wall with an intense poetry and semantic economy.

Precedence will be given to recycled and reused materials. Special care will be taken with the levels of thermal insulation in all the enclosures in order to optimize energy consumption. The courtyard has three deciduous trees which together create a micro-climate appropriate for every season. The double enclosure gives a ventilated facade that favors natural ventilation over radiator heating.