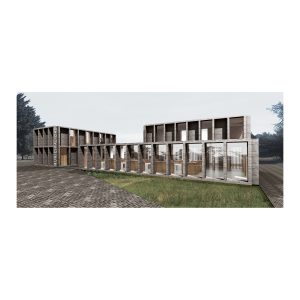 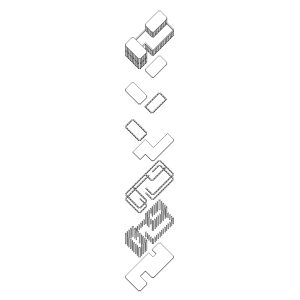 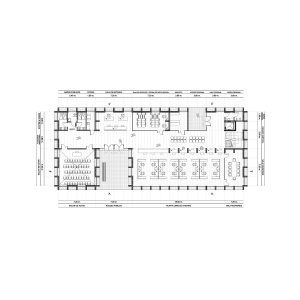 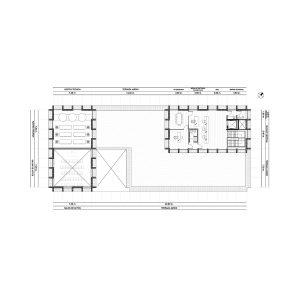 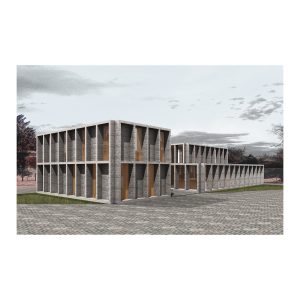 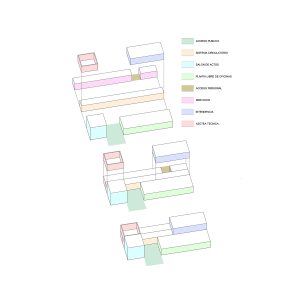 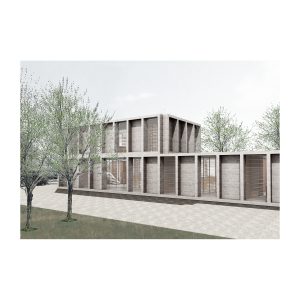 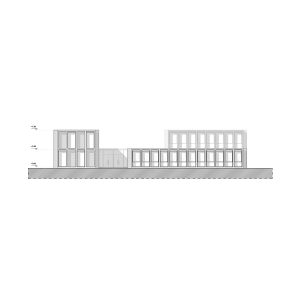 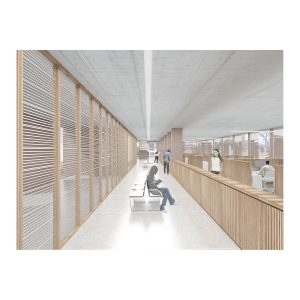 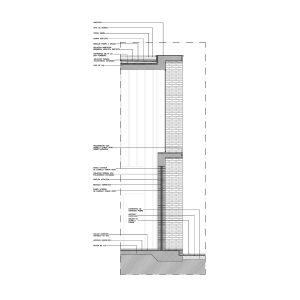 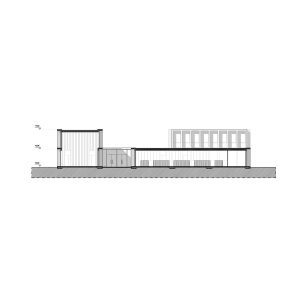 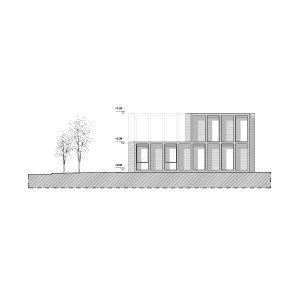 “The framework in which this work moves is that of a cultured architecture, not picturesque, whose main characteristic is the will to order, geometric concept of form, reference to the most elementary abstractions” Ignacio Paricio.

A number of urban pre-existences developed linearly parallel to the old railroad track, a legacy of their memory, are recognized on the site. Some sheds, tree lines, bike path, etc.
we proposed a rectangular building with two levels that is implanted, accompanying the linearity of the site, conserving existing tree species and withdrawing from the municipal line ten meters, to, on the one hand, align with the great existing tree on the corner and by another, to project a large esplanade of access that will be the scene of the civic and public events of the town.
This civic plaza is a fundamental piece of the proposal, understanding the opportunity of the project to generate quality public space and understanding the role of the public space in shaping the notion of citizenship. The plaza and the pedestrian circulation system are projected without solution of continuity, generating a link between the new building of the local executive power and the existing warehouse, foreseeing its recycling with new public programs that enhance the opportunity of the intervention on the site.
BUILDING
The program is developed from a wide and flexible ground floor that organizes the program of greater mass and public access, on which stand out the auditory double height volume and the volume of the private office for the Mayor.
The building is organized from two hollows in the mass that are the access patio, where the public accesses on the esplanade and the access of personnel from the parking lot through a semi-covered.
A longitudinal circulation in the center of the plant articulates the organization of the different spaces of the program. In case that it is required to expand the surfaces, the building considers the possibility of growth towards the northeast, parallel to Miter Street.
The Assembly Hall is located in a strategic location that allows the independent use of the same by the community, beyond the schedules and activities of the municipality.
MATERIALITY
We propose the building with an architecture of strong mass and clear geometry, emphasized by the use of brick. A noble and traditional material, which we can find easily and with very good workmanship of qualified craftsmen resident in the area. The brick does not require excessive maintenance and has very good aging, increasing its beauty with the passage of time. This decision allows us to work with a construction of great thermal inertia very suitable for the climatic conditions of the place.
The southeast face that opens towards the esplanade, is completely open between pillars with glass DVH. And the rest of the faces alternate between glazed panels and double brick walls with expanded polystyrene thermal insulation.
STRUCTURE
The structure is solved with brick pillars and structural walls in the perimeter that take compressive loads and lightened concrete slabs without beams of 20cm thickness, with intermediate supports every 7.20mts in both directions with solid concrete capitals of 40cm in height . Given the terrain seismic zone of grade 2, the structure is complemented with the incorporation of a reinforced concrete thickness inside the double brick walls which form a framework that the horizontal forces take in case of seismic movements.
CLIMATE CONTROL AND ENERGY SAVING
The design was conceived to minimize operating costs. The regulation of the number of glazed panels and the depth of the pillars that work as a sunshade for the northwest and southeast orientations minimize the energy input by solar radiation. The roofs, properly insulated, will lead to the completion of green terraces with 25 / 30cm of organic black earth that will guarantee thermal inertia and thermal insulation to the construction. The project generates from the relation of the depth of plant and the perimeter the greatest possible use of daylight, in favor of saving in the use of electrical energy. Likewise, as well the incidence on the conditions of visual, environmental and psychological comfort.